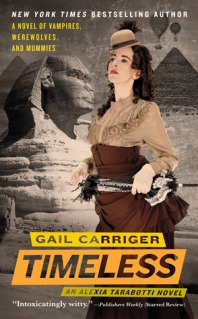 I said in my review of Heartless that the Parasol Protectorate series just keeps getting better, and Timeless did not disappoint me. I think it’s the best of the series. All of the characters are handled well, Carriger’s descriptions are both vivid and precise, and her dialogue, as always, sparkles with wit and humour. Like the rest of the series, this is steampunk with a fine froth and a sense of humour. Timeless also continues the exploration of the political ramifications of the collision of the paranormal and the scientific, delving far back into he AU’s history as well as setting the stage for its future.

Timeless jumps two years forward from Heartless, two years that have been peaceful — well, as peaceful as anything is likely to get in the Maccon household, especially considering they live in a vampire’s closet so that said vampire can serve as adoptive father to two-year-old Prudence, who happens to be a metanatural. Born from her supernatural werewolf father and preternatural Alexia, Prudence possesses the capability to absorb a supernatural’s aspect — leaving said supernatural mortal until such time as Alexia can use her preternatural abilities to cancel everything out. It certainly makes life interesting — not least for their neighbours — but all in all, things seem to be sorting themselves out.

And then Alexia gets, by way of the local vampire queen, a summons to appear with her daughter in Alexandria (yes, the one in Egypt) before Matakara, the oldest vampire living. At the same time, Sidhaeg — Conall’s multi-great-granddaughter and Alpha of his old Scottish pack — shows up, looking for her missing Beta, who had been in Egypt on a mission for her. The Beta reappears, but gets murdered before he can get more than a few words out to Alexia. So Alexia packs up her family — and the Tunstells and their acting troupe — and heads out via steamer (werewolves being notoriously poor floaters). From there, the story whirls through a sequence of mishaps, supernatural political entanglements, and strange occurrences. The action clips along at a great pace, both in Alexandria and back at home, as the Maccons abroad and the wolf pack back at home both try to sort out the mystery of the God-Breaker Plague.

The really great thing here, which started to become prominent in Blameless and Heartless, is Carriger’s ability to not forget character development admist all the action. For a lot of the book, that really shines in Biffy and Lyall, though we do get a fair bit out of Alexia and Conall as well. Biffy’s swiftly becoming my favourite character in the whole series, really, because he goes through such a transformative journey from when we meet him to the end of this book. Without giving too much away, Carriger handles the various aspects of his personality and relationship dynamics really well, with a lot of tenderness and a lot of psychological awareness. She handles the expanding cast of characters without sacrificing any emotional realism, and she jumps back and forth between the two plotlines in a way that makes sure the reader never loses sight of what’s going on.

Carriger also does a nice job weaving multicultural elements into the story. I particularly like the “Drifters”, balloon-living nomads of the North African desert. We don’t get to spend a whole lot of time with them, but you get a sense of real cultural texture nonetheless. I love the idea of this herd of balloons, linked together by nets that the women and children use for social interaction. Her descriptions of steampunk Alexandria and Upper Egypt are a great blend of imaginative and clearly well-researched, and the cast of extras that the Maccon/Tunstell party meets there adds even more colour and excitement to the series.

I also commend Carriger for her ability to portray a toddler character — a notoriously difficult challenge in writing, and one that many authors seem to avoid at all costs. I’m convinced the difficulties in writing such young characters is the reason most happy-ever-afters end at the altar, or at least with the birth. But Carriger strikes it perfectly with Prudence. She has the right size vocabulary to reflect the state where vocalisation hasn’t quite caught up to cognitive reasoning; Prudence understands more than she can express, and this does seem to frustrate her at times. She also manages to make Prudence charming without being saccharine, another admirable feat; Prudence demonstrates the right balance of adorability, manic impulse, and short attention span for a two-year-old. She’s also part of the story without overwhelming it, which I appreciate; too often when series do incorporate kids, it becomes all about them. Alexia’s attitude goes a long way towards keeping this from becoming a trite or obnoxious trope.

I’ve said throughout the series that Carriger is at her best when she’s writing for herself, with her own style, rather than emulating other genres, and in Timeless, she seems to have trusted that impulse entirely. There are no moments of narrative awkwardness, where the story feels like something else has collided into it from the outside; rather, we are treated to the continuing adventures of Alexia et al in Carriger’s own witty voice. It’s a delight. My only criticism is that the denouement ties up a little too quickly. I could’ve used a bit more exploration of the new constructs our characters find themselves in at the end of the series, about how they’re going to move forward from here on out. Ultimately, it just ended way too soon; I could have happily spent a lot more time with these characters.

Timeless is an adventure story that manages to be lighthearted and emotionally tugging at the same time. Carriger gives us characters we can care about, but without ever taking herself too seriously. The series as a whole has fantastic energy, superb wit, and a sparkle that I’ve yet to find in other steampunk literature. The Parasol Protectorate series is just plain fun. I’m tremendously sorry to say goodbye to this series, but I’m delighted that Carriger’s world will be continuing in the YA Finishing School Series and the adult Parasol Protectorate Abroad series. The former will take place some twenty-five years earlier in the AU’s history; the latter is due to feature our Prudence, all grown up and taking on the world. Both are due out in 2013, and I eagerly anticipate their arrival.