The Conquest of Lady Cassandra, by Madeline Hunter 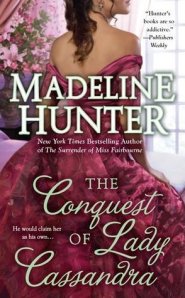 Someday I’m going to read one of Madeline Hunter’s series in the right order. I somehow managed to pick up #2 without having read #1, which I intend to rectify.

Cassandra Vernham is notorious but not quite ruined, thanks to a complicated bit of personal history. Six years ago, she was technically though not properly compromised by a man, and then refused to marry him. That man later got himself stupidly killed in a duel which everyone assumed was over her, further scandalizing her reputation. Estranged from her family thanks to all of this, she spends a few years in Europe with her aunt, then returns home to London and tries to get on with life as best she can. She’s not totally ostracized and still has some friends, but she’s not thoroughly accepted, either, and she tends to end up in vaguely-written items in the gossip columns. Years later, one of her rejected beau’s friends, Viscount Ambury (whose proper name is, tragically, Yates) has taken up private investigation as a bit of a hobby, and is looking into the possibility that some jewels Cassandra sold at auction were stolen — from his own family. Entanglements ensue. Cassandra needs the money because her brother is trying

This one rates just below average for me for a lot of reasons — and it isn’t even that it’s a bad book. It’s just that it left me unfulfilled. I initially gave it a solid 3 stars, but I keep thinking of more things I disliked about it, so I had to knock a bit more off.

The biggest problem is that I just don’t believe in this as a love story. It’s an interesting story, but not a believable romance. I believe that Yates and Cassandra feel attraction and friendship for each other. Once they get over a variety of trust issues, they seem to know how to communicate with each other. But I don’t believe that they feel abiding passion or deep love. The story just plain never gets us there. The heat is sexual but not emotional. Theirs will be a really good marriage of convenience — but it still feels like just that. Hunter never manages to elevate them beyond that point. The title is also misleading. There’s no conquest. Neither Cassandra’s physical nor emotional self is at any point overthrown. She makes a logical decision to preserve her aunt’s future, and she chooses Ambury as the lesser of two evils. It’s all very cerebral, very detached.

I also had issues with some unanswered questions, and while I freely admit some of that might be due to missing the first book in the series, I really doubt all of it is. Ambury’s motives throughout are somewhat vague and mutable. We never really get a good idea of what he does in his moonlighting as an investigator — how long he’s been doing it, how it makes him money, what other cases he’s taken — it’s just sort of a slapped-on detail, not a fully realized character point. The information about Cassandra’s past is sort of annoyingly withheld until very late in the book, and the last-minute turn just seems odd and out of place.

None of that is to say the book is without its advantages. I actually enjoyed the process of reading it, and got through it quickly. The story is compelling — it just isn’t what’s on the tin, you know? Watching Yates and Cassandra negotiate around each other, around their friends, around her brother, is all interesting. I like the slightly different setting (though the publishers need to know not to refer to something set in 1798 as Regency) and the sociopolitical spin that puts on things. And I’ll definitely be picking up the rest of the series, because I generally like Hunter’s writing, and I especially like how she interrogates what romance does to friendship. Not a lot of romance authors do that, even if they’re using the conceit to string together a series. Hunter’s romances, on the whole, seem more grounded in reality than others in the genre — which sometimes works for me and sometimes doesn’t. After all, this genre is generally a fantasy as much as anything involving dragons or magic.