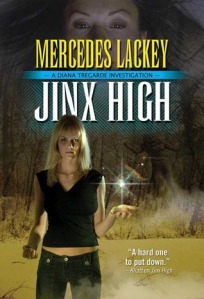 The third and final Diana Tregarde novel, Jinx High sees Tregarde visiting suburban sprawl in the Midwest at the behest of an old friend who senses something going terribly wrong in his town, but can’t place his finger on what it is. Strange accidents keep happening, claiming the lives of teenagers — and they all seem to center around blond, beautiful, perfect Fay Harper, queen bee of her high school. She’s hellbent on eliminating rivals, like newcomer Monica Carlin, and she’s sinking her claws into a series of boys, including Deke Kestral — whose parents happen to be ex-members of the Spook Squad Diana Tregarde ran in college. She comes in under the pretense of assistant-teaching a creative writing class at Deke’s high school, where she also becomes a mentor to Monica, an aspiring writer.

What’s interesting here is that we get a lot more of Diana from an outside viewpoint than in the other novels, with both Deke and Monica providing an external perspective. Even in the other two books, when we do see Diana from someone else’s eyes, it’s somebody who already knew her, like Mark in Burning Water. Here, we see how she’s interpreted by two teenagers who don’t know her and who have no reason to trust her, which makes for some interesting tension. Monica, under magical attack from an unknown source (which the reader knows to be Fay), eventually decides she has no choice but to trust Diana — but she’s still wary, worried that Diana could be the source of her troubles, luring her into a false sense of security. Deke, on the other hand, has no idea his parents have magical talents, and so when his dad asks Diana to come stay to sort things out in town while Deke’s mom happens to be out of town, Deke assumes the worst. He’s psychic, too, but has been powerfully shielded by his parents to protect him, but that also means he’s been kept ignorant and thus has never learned to manage his potential power himself.

Thanks to its setting, Jinx High is way more of a teen novel than the other two books in the series — which isn’t necessarily a bad thing, because Lackey writes incredibly convincing teeangers. Monica and Deke are among the “good guys”, but they’re not perfect, and they have some very teenage flaws — they’re pushing boundaries, willing to be a little petty, a little snippy, a little ungrateful. And Fay uses the social tensions swirling about to build her own power in an interesting way. When she realizes that someone’s pushing back against her, she initially thinks it’s Monica and redoubles her efforts. Diana’s ready for her, though, even though it takes her a long time to figure out where the magic is coming from, thanks to some sophisticated misdirection on Faye’s part. There’s also an under-developed side plot involving an ancient Native American spirit sleeping beneath the city who must not be awoken at any cost. It serves to raise the stakes a bit, but isn’t used for much else. This novel almost escapes Lackey’s perpetual issue with abrupt climaxes. There’s a really great magical battle between Diana and Fay, with great energy, high stakes, and prolonged tension. Unfortunately… that’s the penultimate confrontation. The final bit goes by as fast as ever, and with half of the pertinent characters in another location. And the wrap-up, as is typical, happens in about a page and a half. I will confess, however, that Lackey got me with Fay. I totally guessed wrong what she was all about and where her power came from, so I was pleased to encounter a thoroughly unexpected plot twist.

I would say I liked this book better than Children of the Night but not as well as Burning Water. Definitely worth a read for fans of urban fantasy. It’s sad that Lackey stopped writing these due to poor sales back in the early ’90s, because I think the market would eat them up now. Despite her flaws, Tregarde’s a far better heroine than Kim Harrison’s Rachel. It could also be great to re-invent the idea of her Spook Squad, hinted at throughout this trilogy but, since it apparently existed in the late-60s and early-70s, never actually seen, for the modern age.