A Clash of Kings, by George R R Martin

Title: A Clash of Kings 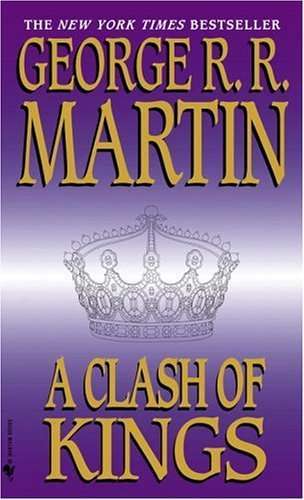 I feel like A Clash of Kings is the book that gets overlooked in this series. A Storm of Swords is generally the highest-rated, best-reviewed, majority-fan-fave of the series. A Game of Thrones tends to fall in second in the overall vote, noted for its tighter plot and for having that “new series shine” — the sense of creation and world-building that generally makes successful first books so enjoyable. Fan opinions are wildly split over A Feast for Crows — some hate it, some defend it, but they care either way, and will generally voice their opinions quite vehemently, one way or another. Whereas A Clash of Kings slips through the cracks a bit. And that’s a bit of a shame, because there’s a lot of good stuff in here.

It’s a set-up book — carefully placing all of the dominoes that get knocked down in A Storm of Swords. And there’s a lot of intricate political posturing, re-posturing, sizing up, and kicking in the shins that happens to get those dominoes in line. The title of this book refers to the War of the Five Kings which storms up after Robert’s death. So let’s wander through this book by means of examining those claimants, shall we?

We learn a lot more about Robert’s brothers, for a start. Stannis (the middle child) and Renly (the youngest by a good margin) have both declared themselves, proclaiming Cersei’s children to be bastards born of incest. Which is true — the trouble is that half of Westeros isn’t listening to them. Or, rather, only half of Westeros is listening to Renly, and no one is listening to Stannis. Stannis is an interesting character, because he’s a total jerk, he has (as the HBO series put it) the personality of a lobster, and you get the sense that he doesn’t actually want to be king, but he sees it as his right and therefore he’s going to take it, come hell or high water (or, possibly, both simultaneously, as we see later in the book). He actually has a lot in common with Ned Stark, in that bullheadedly righteous sort of way, even though he never liked Ned (on account of Robert liking his foster-brother better than his actual brother). Strictly following the rules of succession, he does have the best claim, but, in the immortal words of Renly Baratheon, “No one wants you for their king, Stannis. Sorry.”

Renly, meanwhile, is an utter charmer, who has married pretty young Margaery Tyrell in order to bring most of the South under his control (the exception being the Dornish, still holding themselves aloof till they see how the first few rolls of the dice go). He might make a good king; unfortunately for him, he doesn’t seem to be in much of a rush to get there. He has a host 100,000 strong, all ready to besiege the Lannisters, could easily tear them apart while they’re distracted with the Starks… and he’s lollygagging his way up the Roseroad, holding tournaments and feasting his vassals. He’s a perfect picture of a romantic, chivalric king… and his tardiness gets him killed. Because Stannis, although nobody else likes him, does have a sidekick sorceress who thinks he’s a legendary hero-king reborn (her reasoning is really flakey, if you ask me, no idea where she got this into her head from) — and Melisandre has some pretty icky shadow magic on her side, which she uses to off dear little brother.

So much for Renly. The contender giving the Lannisters the most trouble is Robb Stark, the King in the North, who is winning battles left, right, and center. He has Jaime Lannister prisoner, along with a host of other Lannisters and Lannister-kin. He’s advancing down to the Westerlands, the Lannisters’ home territory.

Unfortunately, these successes are marred by the arrival on-scene of the fifth king in the wars: Balon Greyjoy, who led a doomed rebellion ten years earlier, and who sees the current chaos as an excuse to reassert himself. He decides he’s not quite satisfied being King of the Islands, however, and sends his son Theon — erstwhile hostage/foster-son to Ned Stark, who grew up best friends with Robb — to take the North. Theon does this, for reasons I still can’t quite figure out. It’s clear as can be that the other Greyjoys have no regard for him whatsoever, that they see him as soft and ruined from his time at Winterfell, that they can’t even bring themselves to like him all that much… and yet he doesn’t hesitate to stab Robb in the back and take over Winterfell in the name of the squids. Fortunately, the remaining Starks, Bran and Rickon, manage to escape — though to save face (…somehow), Theon kills two peasant boys of the same age, and tells everyone that he killed Bran and Rickon.

And what of the other Starks? Well, Jon’s up north of the Wall on the Great Ranging. Some interesting things happen, but this section is definitely all set-up for the next book. They meet Craster, an enthusiastically incestuous wildling, who marries his daughters and gives his sons to the Others; they find a hoard of dragonglass (obsidian); they find out that the “king” of the wildlings is bringing an enormous host south to storm the Wall. Arya, meanwhile, is on the run, disguised as a boy, headed up with Yoren to “join the Night’s Watch” — really Yoren intends to drop her off at Winterfell. Also in the group destined for the Wall is Gendry, one of Robert’s bastards, who’s been sent away for his own safety (Cersei’s starting to hunt down and destroy the bastards, since they support the truth of her children’s incestuous heritage), even though he doesn’t know who he is. The group gets caught up in the middle of the battles, however, and Arya winds up at Lannister-held Harrenhal. She assists in its overthrow, aided by the mysterious Jaqen H’ghar, putting it in the hands of at-least-nominally-Stark-bannerman Roose Bolton. The end of the book sees her finally saying “Balls to all of this”, because the Boltons are clearly just as screwed up as the Lannisters, and escaping.

Meanwhile, Sansa is in King’s Landing, and Catelyn is running errands for her son and brother. I have a problem with Cat and Sansa’s viewpoints in this book, in that they don’t really exist to have viewpoints. It’s not what they’re doing or thinking that’s important. They exist to show us what’s going on with the war and in King’s Landing, respectively. Our two kings in those regions — Robb Stark and Joffrey Baratheon — aren’t POV characters in of themselves, nor is anyone else close to Robb. The other viewpoint in King’s Landing is Tyrion, whose chapters are both hugely intriguing and vastly frustrating, as he desperately tries to hold the city and the kingdom together with both hands, and gets absolutely no credit for doing so.

The story in Westeros culminates with the exciting Battle of the Blackwater. Stannis’s fleet sails on King’s Landing, only to be trapped by enormous chains raised in the water and incinerated by wildfire (a nigh-unquenchable green substance something like the legendary Greek fire). They also get smashed by the sudden (if belated) appearance of Mace Tyrell and the power of Highgarden — all those in the south who hadn’t switched allegiance over to Stannis when Renly died. So, the Lannisters prevail, though it’s at considerable expense to poor Tyrion, who leads a sortie and ends up getting half his face sliced off — by a catspaw belonging to his dearly beloved sister.

Finally, out in the east, we have Daenerys, the allegiance across the Water, who no one in Westeros is quite aware of yet — though a few rumours are leaking back to them about three-headed dragons. After making her way across the red wastelands, she ends up in the city of Qarth, where she is at first feasted and feted, but where she soon realizes, everyone’s out to get her, in some way or another. Dany’s best moment in this book is her chapter in the House of the Undying, where a group of powerful warlocks show her a lot of fascinating prophetic images, and then threaten her life. She, via toughest dragon Drogon, burns them to a crisp. This doesn’t make her any friends in the city, though, and she’s soon the target of assassination attempts (again). She’s saved from one of them by Strong Belwas, a champion pit-fighter, and his supposed squire Arstan Whitebeard, sent to Dany by her old Pentoshi protector, Illyrio Mopatis — who has also sent ships, so that Dany can get the hell out of Dodge.

Overall — this is a solid build-up book. Far more so, I think, than A Feast for Crows and A Dance with Dragons, which appear to be, together, serving the same purpose for Winds of Winter, but not doing it nearly as well. The storylines in A Clash of Kings are getting more complex, but they remain crisp and focused. The number of POV characters hasn’t yet spun out of control.

I couldn’t help, during this re-read, thinking about how HBO’s going to handle translating this book for the next season. We’ve already heard rumours that they’ll be pushing Jaime Lannister’s plotline up — indeed, the end of the last season saw a scene that doesn’t happen until the end of ACoK. I suspect that the book-to-season ratio is going to break down pretty swiftly, and I have no problem with that — the plotlines start to diverge more and move at different paces from here on out, so I trust the screenwriters to rearrange sensibly. We also know that Natalie Dormer, a fairly big name, has been cast as Margaery Tyrell, which gives me great hope that we’ll be seeing a lot more of her in the series than we do in the book. Renly’s trip up the Roseroad might get a lot more screen time, not just seen through Catelyn’s eyes, but followed through since the beginning. HBO’s already seeded that by including some scenes with Renly and Loras that weren’t in AGoT — clearly they realise (as GRRM has not) that the Tyrells are a damn interesting family and need more time devoted to them. I also wonder if they’re going to make any attempt to hide the fact that Arstan is Barristan Selmy — which Dany doesn’t find out, and which the book doesn’t make totally explicit, until late in A Storm of Swords. The big adaptation question, of course, is the Battle of the Blackwater — the episode which GRRM is writing for next season. They can’t really skimp out on it like they did the battles in the first season; too much of real importance happens during it. So, it’ll be interesting to see how that goes. Filming started last week — so we should find out in April.